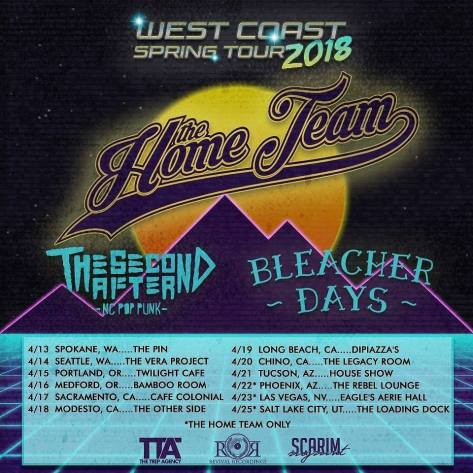 If you’re familiar with the Seattle Music Scene, you’re definitely familiar with The Home Team. Or at least have heard of them in some regard. Made up of five talented musicians, The Home Team has taken Seattle by storm, and also a majority of the West Coast as they have done a number of tours following their 2014 release titled ‘Blacksheep’. Brian, Rob, Ryan, John and Daniel do a fantastic job staying true to the DIY scene and are constantly working to bring their best to the table.

Today marks a turning point in their journey as it has been officially announced that they have signed with Revival Recordings alongside Seattle locals: Avoid and Versus. Not only have amazing strides been made, they’ve released a new single off of their upcoming record which is set to be released sometime in 2018. Head on over to New Noise Magazine to catch the premiere of ‘Fashion Forward’ and also add it to your Spotify Playlist.

If you love what you hear, or maybe you already know, be sure to catch The Home Team as they make their way down the West Coast alongside The Second After and Bleacher Days. For you Seattleites their next local show will be on April 14th at the Vera Project. Also make sure to follow The Home Team for news, dates and releases!

As most of you are already aware Josh Wildhorn, of Designer Disguise, has undergone extensive treatment against leukemia. His treatments started the week following his diagnosis. After various rounds of chemo which grew more aggressive with time it had become clear that the treatments were not effective in eliminating the cancer. In December of 2016, Josh had began an experimental therapy in which the CAR-T cells are extracted and reprogrammed to fight cancer and by the end of the month Josh was cancer free.

Come hang out with Designer Disguise, Osatia, I Am Infamy and Beyond the Woods on April 21st for a benefit concert to help raise money for the Fred Hutchinson Cancer Research Center. Enjoy some awesome tunes by even more awesome people all while donating to an amazing cause!

To read more about Josh’s Battle with Leukemia and to donate to the Fred Hutchinson Center for Cancer Research check out the GoFundMe started by Jackson Bengtsson, Designer Disguise. They’ve got some amazing reward brackets as well!

The heat was intense, but per usual @avoidkicksass still managed to pop off!
AVOID truly does kick ass! Be sure to listen to both of their newest songs "COWABUNGA" and "Split (Kill It)" available pretty much everywhere. They're currently on tour with @fitforakingtx / @silentplanetband / and @hollowfront so make sure to catch them when they come through!
It's 2022 - Let's start this off right! ☺️
So baby when I get famous, everybody's gonna see you never really knew me! 🥰🥰🥰
I have had the luxury of watching @avoidkicksass grow as a band over the last five years, and the journey has been remarkable. Watching their homecoming show was absolutely freeing in a way, and I have definitely missed being screamed at by my friends.
Wage War | Seattle, WA
It's been too long and like many of you, I am so ready to get back to the grind. I miss my friends and my family. I miss the hugs and smiles.
It's been over two months since the last show I've attended, and I'm going to be very blunt. It has sucked, and our venues are suffering. But as much as I miss my friends and family, I would much rather they be safe instead of recklessly putting themselves in harm's way.
Hey Fam! We just posted an article today covering our weekend adventure to meet up with the guys in @draggedunder (link in bio)